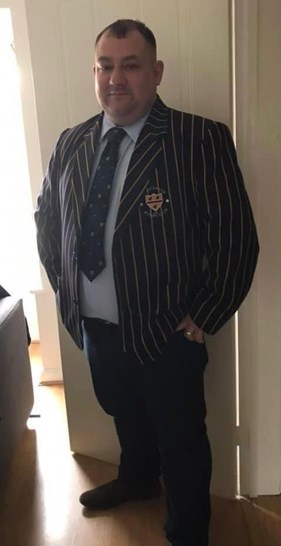 On Friday 9th September, a Worcester RFC member & volunteer, AJ Mills, will be Nationally recognised at the Honda Volunteer of the Year Awards 2022 at Twickenham.

His nomination reflects the time and effort that AJ has put into the club in over 20 years of playing and helping run the club on a volunteer basis. AJ has been playing for the club since 1999 and has played at all levels. “I can remember coming to the club on a Saturday afternoon with my boots in the back of my mum’s car, meeting Mike Clarke and Stephen Lloyd (Current Chair). His first words were “What position do you play?” I said hooker or prop. He asked, “Have you brought your boots?” Yes, I said. “Good, we’re short of a starting hooker today, get them on!” And that was that!”

He moved into a club role 2014 after finishing his RFU leadership Award & helped drive the formation of Worcester Mixed Ability in 2017 (More on that later!) He is now the Club Fixture Secretary & an ever present supporting the club throughout the season; collecting glasses, passing on words of dark front row wisdom or just cheering teams on over a pint. “My wife would say “Chop him in half & he would have WRFC through him.” She’s not wrong and she’s very supportive and patient of my commitments.”

AJ goes on; “This award is not just for me, but for the many volunteers we have. This is not just a club, but an extended family. This is what sets rugby apart from other sports in my view. Without this club I wouldn’t be in this position to make the finals of this award.”

AJ’s biggest achievement at the club, has undoubtedly, been the formation of it’s Mixed Ability Team that has brought in over 100 new players to the club. Mixed Ability Rugby is, very simply, rugby for players of all abilities & disabilities. An inclusive form of rugby with a handful of tweaks to the rules such as uncontested scrums and restricted contact dependant on ability. At the recent World Cup in Ireland, Worcester came a creditable 6th and were the highest ranked side in England. The team were also awarded Most Welcoming Club in 2019.

Club Chairman Steve Lloyd comments “AJ is one of the single most valuable assets we have as a club. He puts in so much work & dedication & is a big cog in the Worcester RFC machine. This award is made for him & what he does for us. I cannot think of a more deserving person to win this. I'll leave with an AJ quote that I think describes how he gets so much done, 'It's easier to apologise to the committee, than to ask for their permission'. Top work AJ you’re a star!”

Notes to Editors:
Worcester RFC always welcome new players at ALL levels and have teams for all ages & abilities from 18 months to 60+ with a 1sts, Colts, 2nds, 3rds, Mixed Ability and Senior Women’s Team as well as didi Rugby & a large Mini & Junior section. To find out more about Worcestershire’s Most Inclusive Club please head to https://worcesterrfc.rfu.club/MembershipInformation